ANNAPOLIS, MD - Today firearm owners from across the state testified in Annapolis regarding multiple gun control bills currently being considered by the state legislature.

Many of those testifying arrived in shirts stating that they "will not comply" with new gun control laws.

This took a turn for the worst when the Maryland Democratic Party secretary, Robbie Leonard, threatened to "dox" those testifying today. 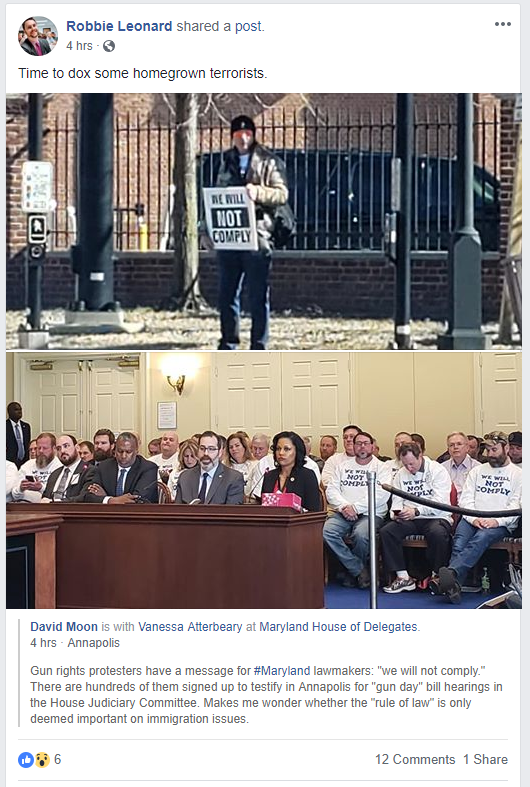 For those unaware, "doxing" is "the Internet-based practice of researching and broadcasting private or identifiable information about an individual or organization."

Additionally, doxing is illegal, and punishable by fines and/or jail time.

Quite often, doxing is also associated with "swatting", which is "the harassment tactic of deceiving an emergency service into sending a police and emergency service response team to another person's address. This is triggered by false reporting of a serious law enforcement emergency, such as a bomb threat, murder, hostage situation, or other alleged incident."

Further in the comments of his post, Leonard expanded on who he was accusing of being "homegrown terrorists".

The WashCo Chronicle reached out to Robbie Leonard and the Maryland Democratic Party. As of publication of this article, neither responded to request for comment, and Robbie Leonard deleted his post shortly after the editor requested comment.

If any response is received, the WashCo Chronicle will publish said response in its entirety.

The WashCo Chronicle is an independent news aggregator and news source. We have made every attempt to publish only factual information, but if we made a mistake please let us know and we'll correct it as soon as possible.  The best way to reach us for corrections or news tips is through our Facebook page.
at February 25, 2019