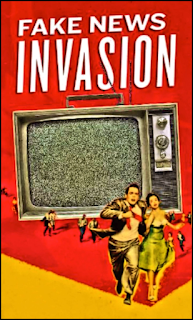 HAGERSTOWN, MD - WDVM recently released a story claiming that Smithsburg residents have started an online petition against Antietam Broadband's lack of competition as an Internet Provider.

But that story isn't completely accurate.

The story from WDVM makes it sound like Smithsburg residents recently started the petition.  However, reviewing the actual petition reveals a different story. 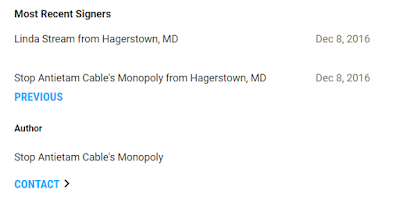 Despite what WDVM's story states, the petition wasn't started by someone in Smithsburg. According to the story "Smithsburg residents have started a petition called 'Stop Antietam Cable's Monopoly.'". However, the first signature is from the petition's creator, who appears to be anonymous and claims to be from Hagerstown, not Smithsburg.

Additionally, there is competition available in Washington County for high-speed Internet. Alternatives include Verizon DSL, Telegia, Hagerstown Fiber, and in some parts of the county Comcast Xfinity. Satellite Internet is also available from multiple companies, but is typically very high latency and low speed.

After failed attempts to involve the Hagerstown City Council, WDVM even ran a story claiming Mayor Bob Bruchey told them to "never call him again". Bruchey actually informed WDVM that he did not want to be involved in their dispute with Antietam Broadband.

We at the WashCo Chronicle would like to encourage WDVM to find some journalistic integrity, and instead of attacking Antietam Broadband over a failed contract negotiation, focus on local news that residents care about.

The WashCo Chronicle is an independent news aggregator and news source. We have made every attempt to publish only factual information, but if we made a mistake please let us know and we'll correct it as soon as possible.  The best way to reach us for corrections or news tips is through our Facebook page.
at March 04, 2019